If job creation and hiring are measures of an industry’s growth, then cannabis is going gangbusters.

That means cannabis executives must use diligence and savvy when sifting through resumes.

While the quality of candidates for marijuana jobs has improved significantly in recent years, only a handful of applicants will be a truly great match for your business.

“The type of talent that we were trying to attract in 2017 wasn’t interested (in the marijuana sector). Now, they’re banging down our door,” said Joey Muehlstein, director of talent acquisition at Green Thumb Industries, a Chicago-based multistate operator that in 2020 hired about 1,300 people, roughly doubling its workforce.

Green Thumb received more than 700 applications for a recent job listing for a regional retail director. “We get to be very selective in who we speak to and who we’d like to interview,” Muehlstein added. “The bar is raised.”

In this type of environment, Kara Bradford, CEO of Seattle-based Viridian Staffing, advises companies to take advantage of the availability of the talent while continuing to practice prudence.

“Companies have pulled back from hiring as aggressively as they would have because of COVID-19—and being conservative in your hiring strategy for 2021 is recommended,” she said. “But I don’t think that they need to be as conservative as they were in 2020. Companies that have been holding back a little might be able to take some calculated risks that they weren’t taking this past year.”

Bouncing Back From Pandemic Layoffs

“We see that number growing exponentially over the next few years,” she said. “And we’re expecting there to be half-a-million jobs three years from now in the cannabis industry.”

Karson Humiston, CEO of Vangst, a national cannabis-focused recruiting firm based in Denver, was even more bullish. She said the number of marijuana industry jobs has grown from 120,000 in 2017 to 321,000 today.

“Cannabis businesses are raising money again, and capital is moving into the space,” Humiston said. “We think 2021 will be the biggest hiring year the cannabis industry has ever seen.”

Marijuana companies are back to robust hiring after job cuts and hiring freezes spawned by a dearth of capital in 2019 and pandemic-induced recession in early 2020, observers said.

Key factors driving hiring include the sales boom that cannabis has enjoyed in the past year, complemented by increased funding that is allowing marijuana companies to expand staff numbers.

“In the beginning of the pandemic, we saw mass layoffs and mass hiring freezes across the majority of cannabis businesses,” Humiston said, adding that the trend affected roughly 80% of companies in the industry. But many of those businesses ultimately recovered.

A year later, Humiston said, her clients are again doing well, hiring and have “really promising plans” for 2021. 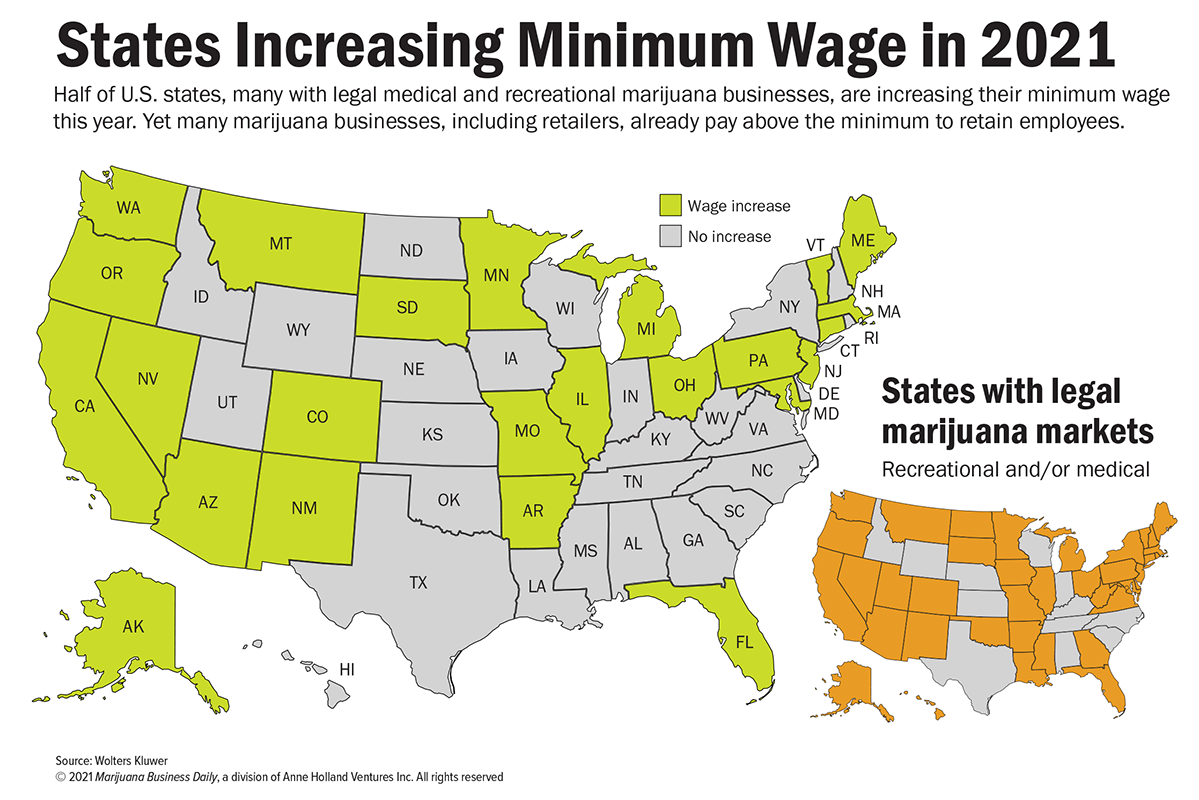 Data from BlueFire Cannabis by FutureSense shows the average salary for budtenders is $31,314 per year, or $15.05 per hour, assuming a 40-hour workweek. The federal minimum wage is $7.25, although some states have minimums set as high as $14 per hour. Emeryville, California, boasts the highest minimum wage in the nation: $16.84 for hourly workers.

The “essential business” designation bestowed upon marijuana companies in nearly 30 states with legal cannabis markets is fueling the hiring as well.

“Once it was clear that cannabis was deemed essential and that online ordering and delivery was a trend, we started seeing a lot of those ancillary businesses do really well, which resulted in them having the ability to hire more people as well as raise more capital,” Humiston said.

She added that companies that raise capital usually spend some of it on new hires.

Humiston cited Dutchie, a national online ordering platform based in Bend, Oregon, and Grassdoor, a Los Angeles delivery service, as examples of companies that profited because of pandemic regulations and were able to hire more staff.

Dutchie, for example, roughly tripled its staff in 2020, from 40 people to about 120, Chief Financial Officer Ross Lipson said.

“The pandemic really boosted the need for businesses like theirs,” Humiston said.

Implementing social-distancing protocols also prompted hiring at some companies. For example, a producer-processor that once had 12 people working at 12 stations during a single shift might now need to spread workers out between two shifts. That could require an extra shift manager as well as one or two more workers to keep productivity at previous levels.

“If you are adding a couple of workers and an additional shift—and multiply that by the thousands of cannabis companies out there—you can see the compounding effect that it starts to have on job creation,” said Bradford of Viridian Staffing.

Recruiters said the most jobs are being created in California, Colorado, Florida, Massachusetts and Oklahoma, while Illinois and Michigan also are considered big states for job creation.

Bradford noted that while urban and suburban areas continue to attract new cannabis businesses, more are going into rural areas.

“In both newer and older markets, we’ve really seen a push into the rural areas, and a lot of that is a result of the price pressures on the market,” she said.

Given the number of talented people who have been laid off from other industries, there has seldom been a better time for cannabis companies to hire, Bradford said.

“There are so many people who are extremely talented that have experienced job loss in the past year,” she said. “We may not see a chance like this again for another 10 years to be able to get that talent over into the cannabis industry.”

Nip It In The Bud – Episode 01: Hiring with HMTC

What are the Requirements to Work in the Cannabis Industry in California?

Secure a Job in the Cannabis Industry

Next
Nip It In The Bud – Episode 01: Hiring with HMTC